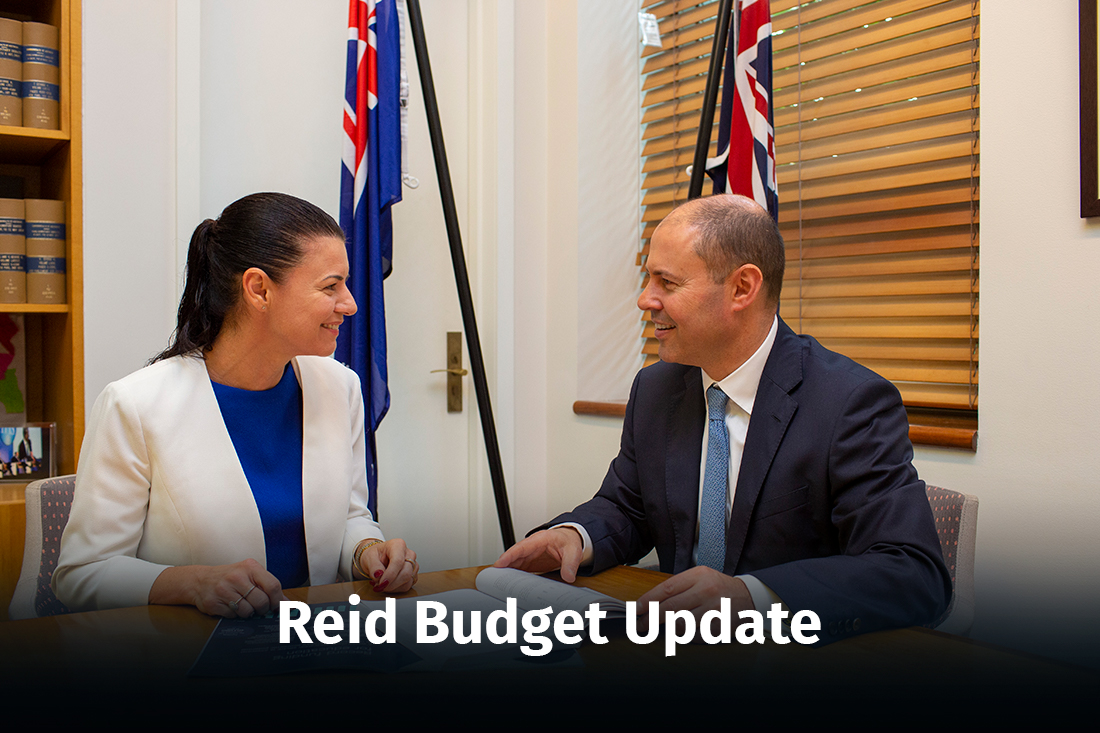 OUR PLAN SECURES THE RECOVERY FOR REID HOUSEHOLDS, BUSINESSES AND INDUSTRY

The Morrison Government’s plan to secure Australia’s recovery will rebuild our economy and create more jobs to ensure we come back stronger from the COVID-19 induced recession, including in Reid

Dr Fiona Martin MP, Member for Reid said: “Australia entered the crisis from a position of economic strength having brought the Budget back to balance for the first time in 11 years”.

“This provided us with the fiscal firepower to support the Reid community when we needed it most including record funding for schools, hospitals, aged care, mental health and the NDIS.”

As part of our COVID-19 response, the Morrison Government has committed $291 billion or

14.7 per cent of GDP in direct economic support for Australians, including thousands of Reid individuals, households and businesses.

As a result of this support we are well on the road to recovery.

“Our plan to secure Australia’s recovery will create more jobs, rebuild our economy and set the country up for the future”, Dr Martin said.

To secure Australia’s recovery the Budget provides an additional tax cut to more than 10 million low and middle income earners, including around 77,900 people in Reid.

It will see low and middle income earners benefit by up to $1,080 for individuals or $2,160 for couples.

This is more money to spend in local businesses, giving them the confidence to take on an extra worker, offer an extra shift, or buy a new piece of equipment.

To support further job creation the Morrison Government will extend temporary full expensing and the loss carry-back measure announced in last year’s Budget for another year.

This will allow more than 99 per cent of businesses employing 11.5 million Australians to deduct the full cost of eligible depreciable assets of any value in the year they are installed until 30 June 2023.

The Morrison Government is doubling its commitment to the JobTrainer Fund to support a further 163,000 new training places to upskill job seekers and meet skills shortages.

education short courses and 2,700 places in Indigenous girls academies to help them finish school and get a job.

We will also accelerate digitals skill training for job seekers with low levels of reading, writing, maths and computer skills.

Dr Martin said, “the Government is building the infrastructure our community needs for the future, with a record 10-year $110 billion infrastructure pipeline, which is already supporting 100,000 jobs across the country, including vital local projects such as WestConnex. The Federal Government contributed $1.5 billion to this project.”

“This also includes the ongoing upgrades to Homebush Bay Drive. The Urban Congestion Fund is providing $50 million towards this project.”

To cut the cost of living for around 1200 families in Reid and to help boost workforce participation, the Government is making an additional $1.7 billion investment in child care.

The Morrison Government will:

·         Increase the child care subsidies available to families with more than one child aged five and under in child care, benefitting around 250,000 families; and

For those families with more than one child aged five and under in child care, the level of subsidy received will increase by 30 percentage points to a maximum subsidy of 95 per cent for their second and subsequent children.

In last year’s Budget, the Morrison Government invested $1.5 billion in a Modern Manufacturing Strategy to ensure our international competitiveness and to create more jobs.

Under the patent box, income earned from new patents that have been developed in Australia will be taxed at a concessional rate of 17 per cent, applying to the medical and biotech sectors, and consulting on expanding it to the clean energy sector.

Our comprehensive manufacturing plan will help Australian businesses to develop the next bionic ear or cervical cancer vaccine.

Federal Member For Reid
Dr Fiona Martin MP
HomeAbout FionaNewsContactCommunity Survey
Thank you for signing up for updates from Jason!
Oops! Something went wrong while submitting the form.